The Amazon or Rain forest is the biggest lung of the world so you reach one of the deepest parts of this ecosystem afterward we ride up to the entrances of the Ecuadorian Andes called Baños.

The best models for dual-sport and adventure. We offer Royal Enfield Himalayan 411cc. model BS3, BS4, and BS6 for these tours. Motorcycle rental is included in the price of the tour.

This tour is designed to show you the extremes that Ecuador can offer. Our Amazon basin is known world wide for its impressive sceneries that come form the slow transition form our Andes region all the way down to the Amazon Jungle. Ecuador is the most biodiverse country on the planet, this unique condition allows us to have landscapes that you can not any where else.

You will ride from Quito south heading to the village of Papallacta, this small area is well known for it natural hot springs, this is the gateway to the amazon basin from the Ecuadorian highlands.
In the Andes, the higher you get, the cooler the temperatures are. During the day it can be warm and sunny, rain in the afternoon, and chilly in the evenings. This area is no exception, you will pass trough one of the heights roads in the country at nearly 4.000mts. over sea level.

If the climate is good on some parts of this trip you will be able to se the Sangay volcano, Sangay National Park has three volcanoes, tropical rainforests, and mountain paramos, making it a natural wonderland that extends from high peaks to the Amazon basin.

You will keep riding trough the amazon jungle to the small town of Puyo, this area is known as «Heart of the Amazon» is the largest Canton in the country with 9800 square kilometers. It has become the most touristy Canton of the Amazon.

The landscape and the natural beauty of the charms of Pastaza, offer the best options to visitors and scientists who wish to know the impressive vegetation, fauna, immense rivers, waterfalls and other fascinating places of the east of Ecuador.

The name of the city is because it is located on the banks of the Puyo River. In turn, Puyo comes from the word puyu which means haze in Quichua. Located on the outer flanks of the eastern cordillera of the Andes, in the Amazon Region of Ecuador, in the west of the province of Pastaza; approximately one hour from Baños along a very good quality road. It is located at 924 m. above sea level, at a latitude of 0 ° 59 ‘-1 «S and a longitude of 77 ° 49’ 0» W. Puyo is a small city that in recent years has significantly increased its tourist offer with special emphasis on the ecological and adventure activities. It has a great hydrological richness to its surroundings, besides the Puyo River runs east of the city.

From Puyo we will head back in to the Andes to the city of “Baños de Agua Santa”.

The setting is amazing: you can see waterfalls, hike through lush forests, rest your in steaming thermal springs (similar to Papallacta), hike down impossibly steep forest hills, bike or boat all the way to back to the Amazon Basin, and see the occasional eruption of nearby Volcán Tungurahua. 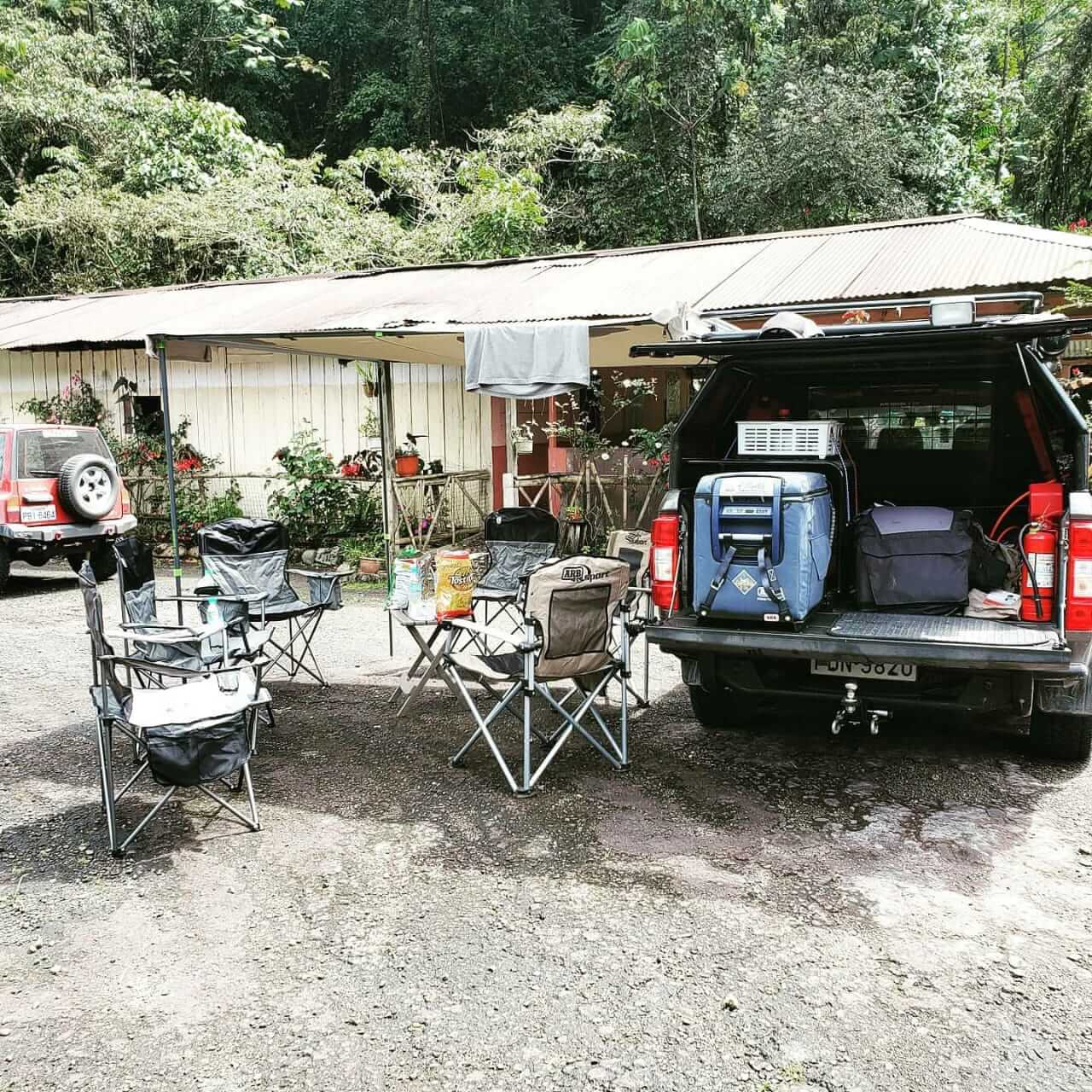 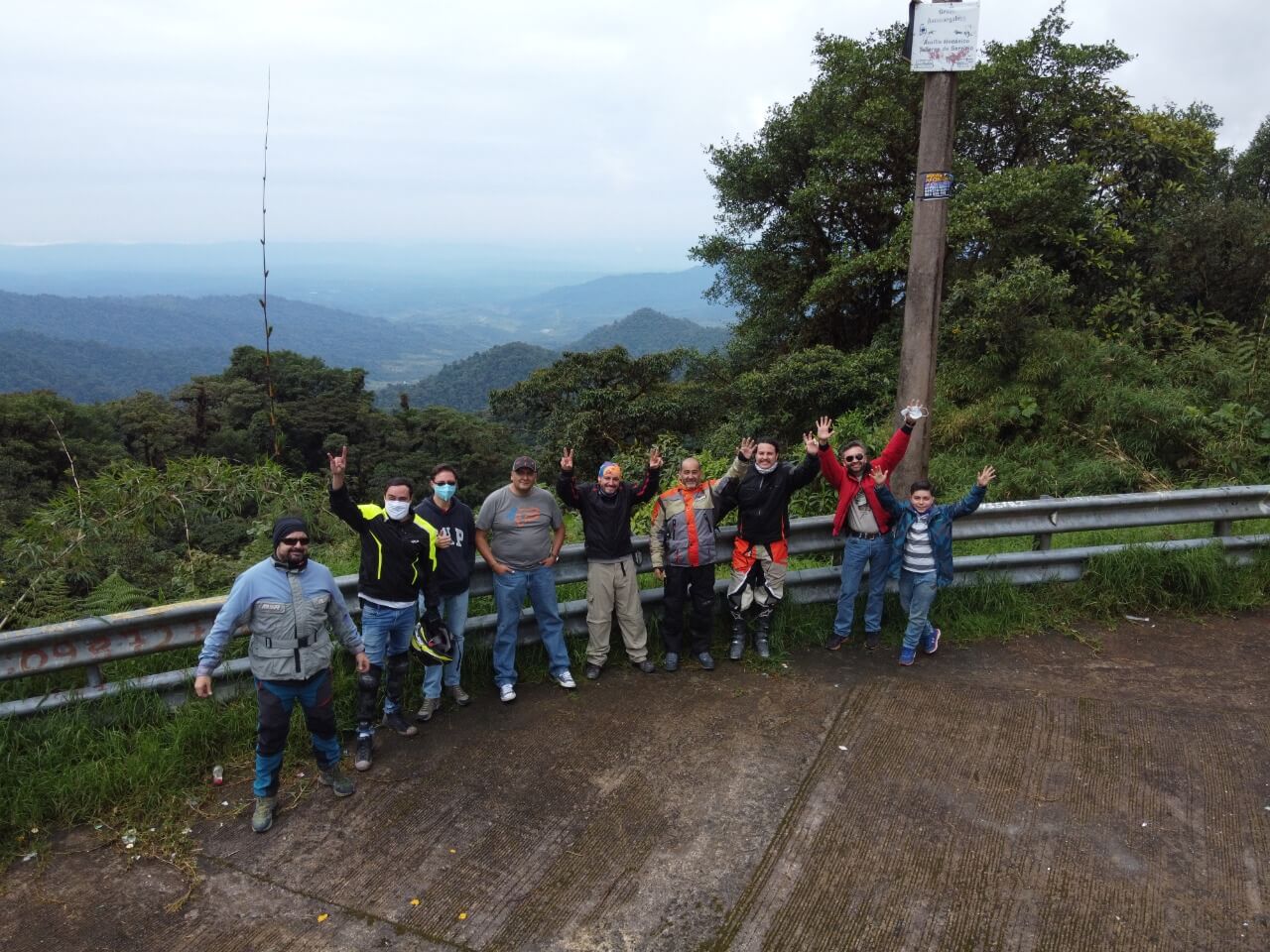 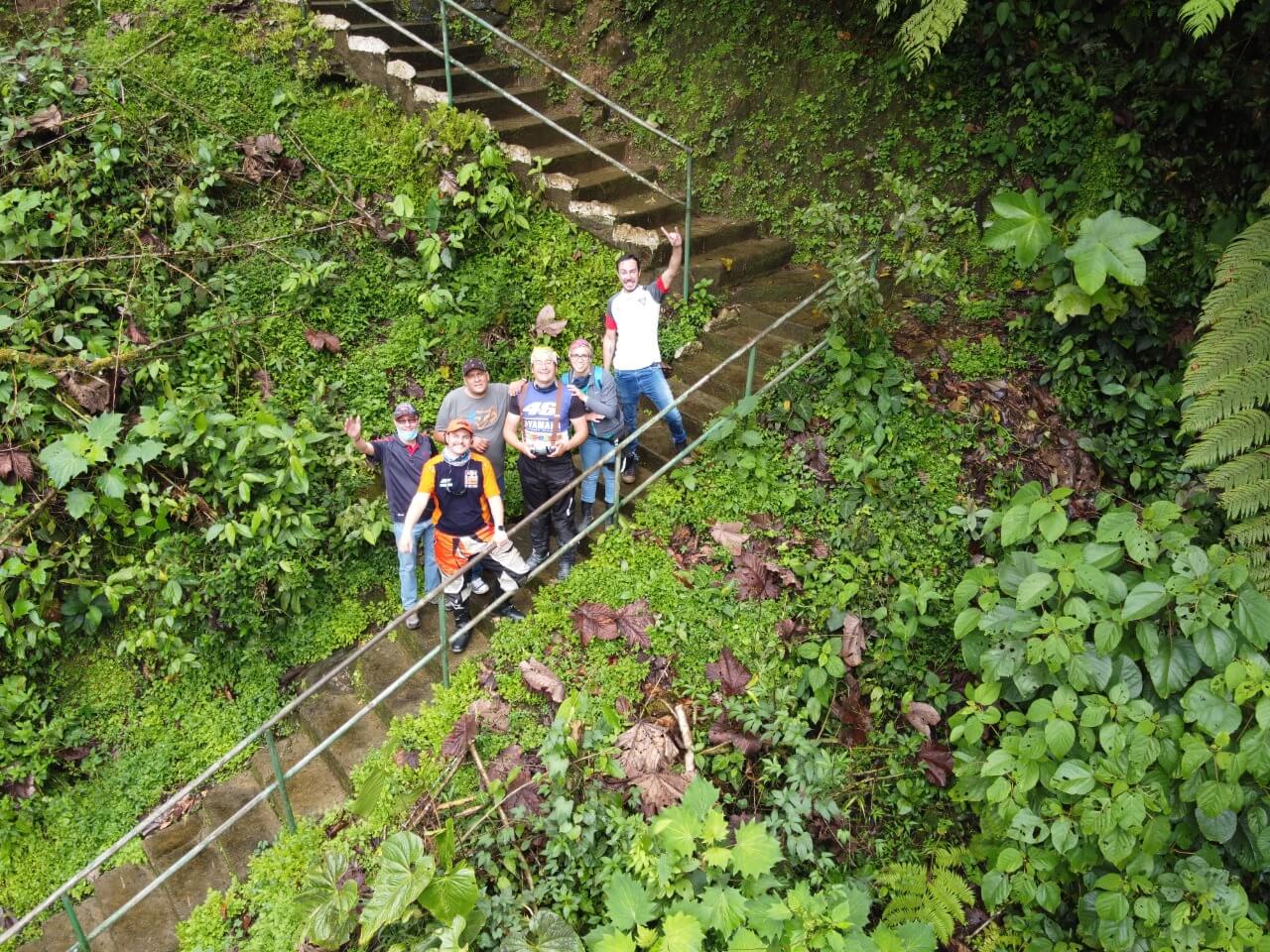 The Amazon or Rain forest is the biggest lung of the world so you reach one of the deepest parts of this ecosystem afterward we ride up to the entrances of the Ecuadorian Andes called Baños.

We do not want you to «push your limits»; instead, we want you to be able to lift your head, look around, and enjoy the amazing scenery during the ride by following the guide.
Our goal is a safe drive for the entire route.

For travelers, the weather in Ecuador’s Andes is a bit confusing. Each region has its own weather patterns. While it can rain daily through the wet season, it also rains in Chicago, London, Venice, and elsewhere. The advantage that Ecuador’s highlands have are that there is normally sunshine as a matter of course, and instead of temperatures dropping during this time, they rise-helped out by the warm current from the jungle and from the coast of Panama.

There is a dry season and a rainy season in the highlands, the first running from June to September, and the latter taking place between October and May. It’s generally cooler during the dry season, while the wet season brings warmer temperatures and rain showers.
This is very much a rule of thumb, as some years the rains can last into the summer months, or only come sporadically.

In other areas of South America, including the climbing town’s in Peru, rains shut down tourism for months as storms pelt the area and make traveling there an endurance sport. Ecuador enjoys temperate weather that is often compared to “Eternal Spring,” making exploring the four regions at any time during the year an adventure worth taking.

For more information about travel in Ecuador, the Andes weather and creating a trip that takes you off the beaten path and beyond, contact a member of our team and find out more about putting together your own Ecuador customized trip with the assistance of our local experts.

Expert local guides bring their knowledge and insight to lead you on stunning rides. They’ll set the pace, organize food stops, and sightseeing. These tours suit those who appreciate personal service yet enjoy the fun of riding with a small group of like-minded motorcyclists.
Guidance service includes an English speaking guide on a motorcycle, The Guide will make many stops throughout the day to introduce you to the locals, explain the local history, and show you «hidden gems» that are not common knowledge.
MEALS IN LOCAL RESTAURANT

Your luggage will travel with you in our support vehicle, so you can travel light.

Accommodations on this tour

All of our hotels are three stars, and the accommodations are based in twin/double rooms and it can be updated to five stars and single rooms, Our accommodations are selected for their exceptional quality, location, and unique character and it is offered by our Private Travel Agency.